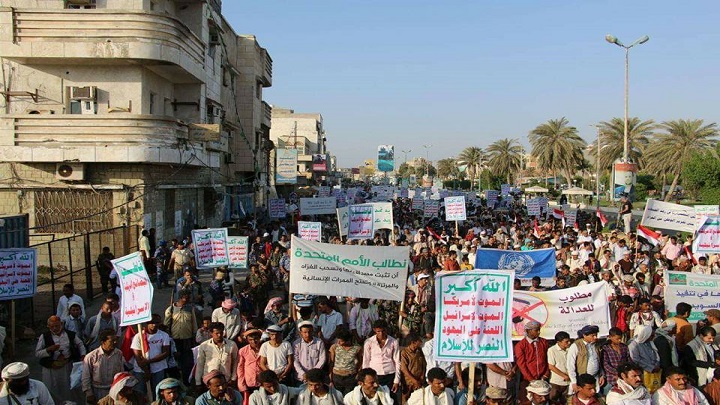 Yemenis have all their rights to defend themseves:Yemeni official

More successful retaliatory operations are waged by Yemeni army forces against Saudi-led coalition, backed by the US,paid fighters in response to its airstrikes on Hodeidah over the past 24 hours in violation of a truce .

More than 80 paid fighters loyal to the coalition were killed, while others were injured on Sunday in a ballistic strike targeting their gatherings in the Midi border district of Hajjah province, northern Yemen,  Yemen’s army spokesman Yahya Saree wrote on his official social media page.

According to the army spokesman, Yemen’s missile force fired a ballistic missile on Saturday night, targeting gatherings of Saudi troops and its paid fighters in Midi area, where they were preparing for large scale attacks towards Hiraan and Haradh districts.Over 80 paid fighters were killed and wounded as a result of the attack, confirming that the ballistic strike was precise, as dozens of cars were seen rushing to the targeted sites to transport the dead and wounded towards Jizan, amid intensive flying of various types of aircrafts,and pointing out that the strike caused a state of extreme horror and confusion in their ranks.

Last January, one of the Demining Team was killed by the coalition’s paid fighters’ sniper’s gunshot with the presence of the Military Committee and the UN-team on site.In a related context the UN envoy met the Coordination Committee for the implementation of the cease-fire and the local authority, which discussed the difficulties that faced the Stockholm agreement and violations of the US-Saudi aggression.

A UN body has warned that 1500 pregnant women are now at risk as the city’s only hospital was bombed by the coalition.

The coalition and its paid fighters committed 4400 violations of the UN-brokered cease-fire in Hodeidah over the past month, Yemen’s army spokesman Yahya Sarie said in a statement on Saturday.“The violations included artillery and missile attacks that targeted houses and farms of the citizens in several districts and Hodeidah city,” Sarie said, and confirming that the coalition has been continuing in reinforcing troops and military vehicles to the frontlines in the south of Hodeidah since Sweden’s agreement in December 2018.The UN-brokered truce went into force on Dec. 18.

Sare’e, said that the violations of the coalition and its paid fighters since the declaration of the cease-fire amounted to 4621 violations, stressing that what is happening in Hodeidah is not just violations but a serious military escalation, noting that the intelligence confirms the continued aggression in bringing reinforcements to the Mukha for distribution south Hodeidah.

He ,during a press conference held in the capital Sana’a said that the total violations in Hodeidah in January amounted to 3819 violations, pointing out that the paid fighters fired 222 rockets, 2512 shells and more than 680 violations of machine guns, 22 developments during January, while violations of the coalition aerial 106 violations.

Brig. Sare’e confirmed that our forces had demonstrated their full commitment to the ceasefire agreement and that the implementation of the Swedish agreement did not require more observers than the need to compel the enemy to comply fully with the voice of peace, pointing out that the next phase will witness the quality processes have not been implemented before and will represent an important and accurate transformation in the history of the battle with the enemy. Brigadier Sare’e stressed that bringing in more foreign paid fighters, especially from African countries, would only add to the enemy’s strength more losses.

The spokesman said that the commitment by the government stems from the full responsibility to implement Sweden agreement brokered by the United Nations.

Al-Shami explained that propaganda promoted by the coalition and its paid fighters on targeting the joint committees to cease fire is unfounded and come to try seeking to fail Sweden agreement and covering the coalition’s continued violations in Hodeidah.

Protest rallIies were staged by residents and sheikhs of many Yemeni provinces to denounce a cease-fire violation by the coalition in Hodediah province.

At the rally, the protesters condemned the starvation policy, all-out blockade and targeting the national economy by the coalition to target the Yemeni people.

The rally affirmed on the need to maintain a cohesion of the internal front and stand united to confront the coalition ‘s military escalation and its plans.

Hodeidah is a strategic port city which should be supporting more than 20 million Yemenis. It should be the source of at least 70 percent of all imports to Yemen,” Suze van Meegen, a protection and advocacy adviser with the Norwegian Refugee Council, told AFP. The coalition has been eager to retake from Yemeni army forces control, according to Yemeni officials.. But the former UN special envoy to Yemen, Ismail Ould Cheik, warned against attacking the port city over potential catastrophic consequences to Yemen last year. Martin Griffiths, the new special envoy to Yemen, echoed the same concern over attacking Hodeidah at the UN Security Council .

The United Arab of Emirates bought weapons from Israel to kill the Yemeni people, an Israeli Journalist and academic researcher at Begin-Sadat Center for Strategic Studies said.

Protests Demand Netanyahu to Step Down