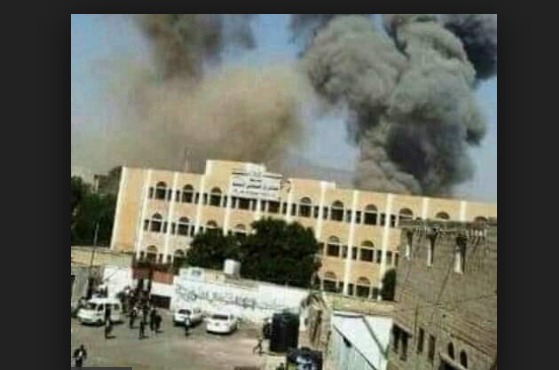 The Ministry of Foreign Affairs strongly condemned the continuation of the coalition of aggression in committing war crimes in Yemen, the latest of which was the airstrikes which targeted a school and residential area in Sa’wan of capital Sana’a, killing and injuring dozens, mostly students.

The Ministry of Foreign Affairs said in a statement that the coalition’s warplanes launched more than a quarter of a million raids since 26 March 2015, targeting civilians and civilian objects, resulting in the death and injury of more than 41 thousand of citizens, including women and children, and the destruction of tens of thousands Of economic and social facilities and public and private property in flagrant violation of international humanitarian law and international human rights law.

The statement stressed that the silence of the international community on these crimes and the continuation of some countries in providing weapons to coalition’s countries and not naming the party obstructing the peace efforts, such as green light, to continue committing its crimes against Yemen land and human and to obstruct the implementation of the Stockholm agreements and the peace efforts of the UN envoy.

The statement called on the international community, in particular the Security Council, the Human Rights Council and organizations, to take responsibility and condemn the crimes committed by the Saudi-led coalition, and pressure to end the aggression and siege imposed on Yemen for the fifth year in a row and the implementation of the Stockholm Agreements.

The statement reiterated the call of the Salvation Government to establish an independent international commission of inquiry to investigate all war crimes against humanity and violations that the countries of the coalition continue to commit and to bring the perpetrators to justice to achieve accountability and impunity.

UAE tries to drive Yemenis out of Yemen

Watch: coalition’s warplanes bomb a residential neighborhood near a school in Sana’a