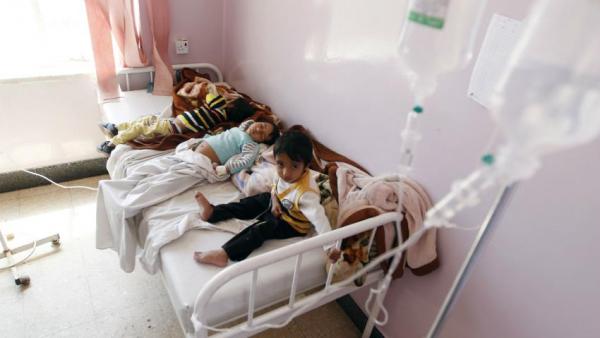 The Yemeni Ministry of Health revealed in its report that ninety-seven percent of the equipment, medical devices went out of service after it exceeded the life span and can not be maintained as a result of the blockade. While 60 percent of the health facilities because of the siege and targeting direct and indirect war against the people.

A critical situation for patients in hospitals due to the lack of medicines and medical supplies increased the situation of Sana’a airport closure in front of tens of thousands of incurable diseases.

He held the UN and its Special Envoy responsible for all coalition’s massacres against the Yemeni People including the latest, adding that more than 100,000 Yemeni children die in one year because of the coalition and the siege imposed on the Yemeni people.

Also, paramedics were killed by the coalition’s targeting of ambulances. In a statement, the Ministry of Health condemned the coalition that cross all red lines and targeting the two ambulances, their medical crews and patients on bord.

In a protest in Dhamar, doctors and staff of the General Hospital today condemned the media campaign and false news targeting the hospital, patients, health staff and workers.

During the protest the participants confirmed that Dhamar Hospital General Hospital is a civil health facility that provides medical, health services to citizens and patients of all categories. All specialties, more than five hundred employees and health and technical staff in all departments participated in the protest, denying the false news and fabrications of the media of the coalition and its paid fighters about the existence of a secret prison to detain dozens under the hospital, and confirming that the body is a medical institution that provides health and humanitarian services to the community around the clock.

The Saudi-led coalition launches about 900 raids on Yemenis: Yemeni offficial