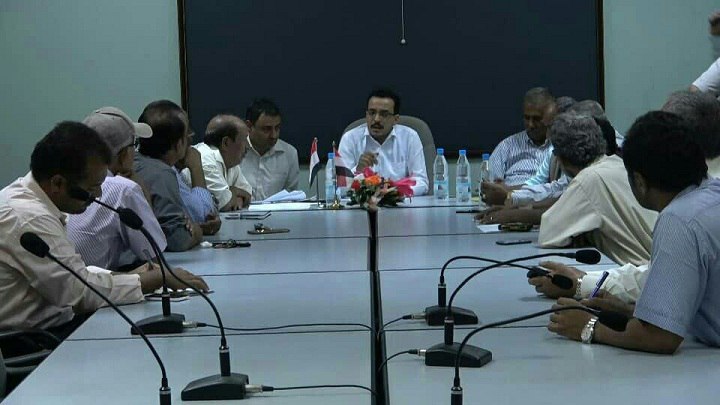 Discussing Responding Plan for the Dengue and Malaria Pandemic in Hodeidah

A meeting held Sunday under the chairmanship of Hodeidah Deputy Governor, Abdul Jabbar Ahmed, discussed the plan of the Public Health and Population Office to respond to the dengue and malaria pandemic, which has spread during the past period in a number of districts.

At the meeting, the governor underscored the importance of concerted efforts and coordination between the offices of health, public works, the fund of hygiene, water, sanitation and water resources to face the pandemic and work in accordance with the urgent plan that has been developed to get rid of dengue and malaria.

The deputy governor pointed out the role that community health education should play through the field descent of residential neighborhoods to raise awareness of the need to take urgent and quick measures towards all negative behaviors that constitute a mosquito incubating environment. He directed the formation of field teams in the directorates of the relevant authorities to go down to residential neighborhoods and work to get rid of the outposts and swamps surrounding the housing.

Dr. Abdulrahman Jarallah, Director General of the Governorate Health Office, reviewed the Office’s plan of action to combat the dengue and malaria epidemic, which was initiated to preserve the health of the population and raise their level of awareness to prevent all diseases and epidemics in the province. He pointed out that the plan focuses on three tracks, including awareness-raising and health education, vector control and treatment, in order to get rid of diseases and epidemics.

Dr. Jarallah stressed the importance of concerted efforts by the concerned departments in the governorate to get rid of contaminated foci that create the appropriate conditions for the spread of epidemics and diseases and increase the burdens faced by the health office, especially in light of the conditions experienced by the province due to the continued aggression and siege.

For his part, the expert of epidemics and epidemiology, Dr. Sultan Al-Maqtari, attending the meeting, pointed out the importance of dealing with one mechanism by focusing on high-risk areas, and then the most. He stressed the need for coordination between the concerned authorities to eliminate the causes that breed and spread mosquitoes, especially in the winter, which is an appropriate season for mosquito breeding.