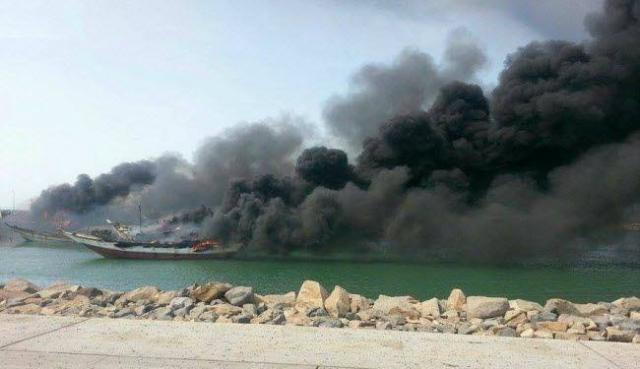 The coalition of US-Saudi aggression has stepped up its airstrikes on Hodeidah, announcing the implementation of what it called “qualitative operations”, in an escalating move towards the torpedoing of the Stockholm Agreement on Hodeidah and a war explosion.

A security source in Hodeidah stated that the aerial aggression launched five raids on Ras Issa and the sixth raid near Jabal Al-Melh in the Salif district, and continues an intensive flight over the province.

“The continuous escalation by the coalition of aggression is moving toward detonating the situation militarily,” the security source said in a press statement, stressing that the Army and Popular Committees will not remain idle.

The escalation of the aerial aggression coincides with the continued escalation of the coalition forces, violating the cease-fire in the city of Hodeidah and the southern countryside districts and targeting homes and civilian facilities with various types of weapons.

The security source, in his press statement regarding the “dangerous escalation of the aggression coalition,” renewed the warning of the head and members of the National Team in the Joint Coordination Committee for the redeployment of forces in Hodeidah.

The Head of the National Team in the Redeployment Committee Maj. Gen. Ali Al-Mushki has warned that the continued escalation by the coalition of aggression forces against the besieged city of Ad-Durayhimi will undermine the Stockholm Agreement, forcing the Army and Popular Committees to respond.

“The aggression forces and their mercenaries are preparing for an attack on the besieged city of Ad- Durayhimi, which means the complete abolishment of the Stockholm Agreement,” Al-Mushki said in a statement following the meeting of the National Team in the Redeployment Committee with the United Nations Mission in Support of Hodeidah Agreement (UNMSHA).

“What we are seeing is no longer just breaches but major military operations that will force us to respond,” he added. “We cannot remain silent after all our steps to save the Stockholm Agreement.”

Al-Mushki reviewed the aggression forces violations of the Stockholm Agreement and the implications for the safety of citizens’ lives.

He also uncovered the involvement of some international organizations in trying to displace Ad-Durayhimi’s residents from their homes and pushing them to accept the forcible displacement to Aden or Taiz provinces.

The violations of the ceasefire in Hodeidah by the coalition and its armed forces, since the announcement of the Sweden agreement until last Tuesday, have caused 4,670 civilian casualties, mostly children and women, in addition to severe material damage to hundreds of homes, farms, public and private facilities.

Head of the National Delegation: Solution in Yemen only Possible After Stopping Aggression, Lifting Siege