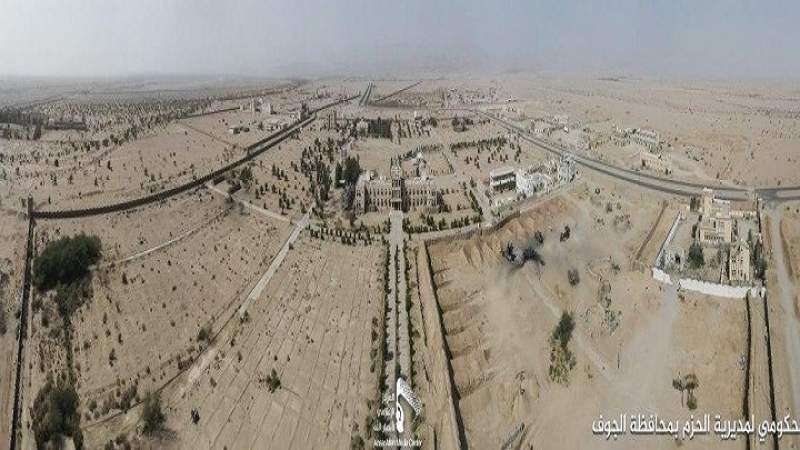 The importance of Al-Jawf

During his campaign, US President Donald Trump summed up the real reason behind Saudi military intervention in Yemen specifically in the rich provinces near its borders.

He said in November 2016: “They (Saudi Arabia) are gasping behind Yemen’s oil, which is behind their common border with Yemen, stressing” they seek Yemen’s oil and natural wealth, nothing else.”

Behind the long joint borderline, the floating Al-Jouf Governorate is located on a lake of oil, equal to an area of 3 Gulf states such as (Bahrain, Qatar and the Emirates). Therefore, Saudi Arabia mobilized throughout the occupation years military brigades with advanced military equipment and recruited thousands of mercenaries to keep the governorate submissive.

Al-Jawf is considered the second governorate after Hadhramaut, in terms of its large geographical area.

As the Saudi-American aggression approaches the anniversary of its five-year military campaign, the Yemeni Armed Forces’ victories and achievements continue to accelerate. The Yemeni Army achieved in only three military operations what the coalition has achieved in years; liberating a wide range of Yemeni lands.

The first of the operations was “Bunyan Al-Marsous Operation” at the end of last January, which resulted in the clearance of Nehm district, characterized by its rugged terrain, and the liberation of parts of the governorates of Marib and Al-Jawf.

This operation made the coalition’s dream of reaching Sanaa vanish, and in return, it opened the way to Al-Jouf and Marib known for their easy geographical nature. This is especially due to Yemen’s possession of advanced air defense technology systems, four of which were discovered and developed by Yemeni expertise.

These systems are said to have changed the course of the battle. Indeed, the systems proved their effectiveness by shooting down a Saudi technologically advanced “Tornado” combat plane on February 14, while the fate of the pilots remained unknown.

This indicates a break in the air superiority highly adopted by the Saudi American aggression, allowing the progress of the Yemeni army and the people’s committees in the plains.

As for the third strike, it was embodied in a harsh Yemeni response after the coalition committed a massacre that claimed lives in Al-Jawf by implementing the “third deterrence operation”. The operation targeted the industrial and oil region of Yanbu on the Red Sea coast in the Saudi depth, more than 1,000 kilometers from the nearest border point with Yemen, and was conducted with 12 Samad 3 drones, two winged missiles and the long-range ballistic missile Zulfiqar.

Freeing Al-Jawf and the road to Marib

The Armed Forces spokesman, Brigadier Yahya Saree, announced on Tuesday 17 March 2020, the liberation of “all districts of Al-Jawf Governorate except for some areas in the district of Khub wa Al-Sha`f and a desert in Al-Hazm region.”

Such remarkable victory occurred with the participation of the missile force and the air force in more than 50 operations, a number of them aiming for Saudi depth. This reveals that Saudi Arabia is no longer able to protect its agents on the ground even on the open borderlands. Meanwhile, such operations make Saudi Arabia and the rest of the world reconsider their calculations as the capabilities of Sana’a continue to become more sophisticated.

Apparently, the liberation of Al-Jawf paved the way for the Yemeni Armed Forces to the city of Marib, which is the last and most important Saudi-held area on the eastern side. The spokesman explained that they are awaiting the political decision of Sana’a and a response to the initiative of the National Reconciliation Team, which he launched on February 27. He called for “mercenaries in Marib to respond to people’s demands by opening the road linking Ma’rib and Sana’a, operate the Ma’rib power station, supply the affected areas, foremost of which is Sana’a, and deal with oil and gas wealth as a right for the Yemeni people without discrimination.”

After five years of aggression against Yemen, it became clear that Saudi Arabia is no longer able to protect itself from the repeated Yemeni strikes on vital and strategic sites in its depth. The world has, more than once, seen Aramco Company under attack in Saudi Arabia, a major backbone of the Saudi economy. Therefore, the coalition’s mercenaries must comprehend the dimensions of the new military escalation and respond to Sanaa’s calls for peace.