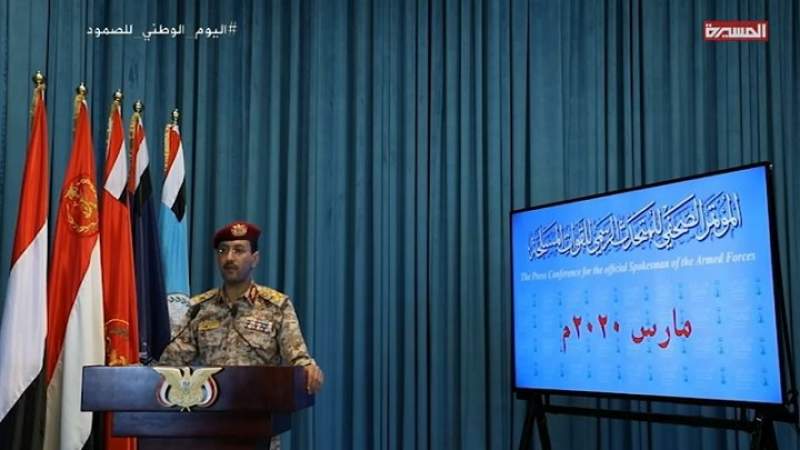 In Numbers: Losses of the 5-Year Old Saudi American Aggression in Yemen Uncovered

He uncovered the number of losses suffered by the countries of the Saudi American aggression in Yemen despite the huge difference in the number of soldiers and equipment between Yemen and its enemies.

Brigadier Saree said in a press briefing that the armed forces succeeded, with the help of God, in confronting the fierce aggressive attack. At the beginning of the aggression, Yemen was not prepared militarily for combat, however, popular support and the tribes’ major role contributed to taking the necessary measures to respond to the aggression.

He said that the number of aggression raids announced is limited to what has been detected and that there are raids that were not monitored, especially during the first years of the aggression. He then reveals the total number of raids launched by Saudi American aggression from day one until this March, amounting to 257 thousand. In only the fifth year of aggression against Yemen, 6657 raids were launched, including 1225 raids during the past three months.

He added, “thousands of our dear people were martyred and tens of thousands were wounded as a result of the brutal aggression, in addition to very large losses in public service facilities.”

He added that the armed forces took upon themselves the task of defense and confrontation, considering it a religious and patriotic duty towards the Yemeni people and the homeland.

Moreover, he stated that the military establishment was the first target for the aggression since it attacked its headquarters, units, equipment, individuals and leaders.

Brigadier Saree also affirmed that documenting all the crimes of aggression is a national task and a religious duty that everyone is responsible for, particularly the competent ones. He also indicated that the Yemeni people will not forget the victims of the Kobra Hall nor the massacre of child victims and will not forget the victims of the horrific brutal massacres of aggression in all regions of the Republic, saying: “Our great people surpassed many tragedies and hardships during the past five years, and with the help of God Almighty, what remains shall be surpassed by patience, determination and sincerity.”

Regarding the military operations, Brigadier General Saree said that the Yemeni forces succeeded in carrying out wide and qualitative military operations that imposed new equations in the battle and led to huge losses among the ranks and equipment of the enemy forces.

He pointed out that the most prominent results of those operations are the liberation of large areas in Nehm, Al-Jawf, Marib, Al-Dhalea and the border fronts. In addition, thousands among the ranks of the aggression have fallen between killed, injured or detained.

“Among the operations of our forces is the strategic deterrence of the missile force and the air force that targeted a number of hostile targets within our forces’ bank of targets.”

The spokesman for the armed forces added that during 2019, the number of missile force operations reached 110 operations in addition to 64 ballistic missiles’ operations during the past months of this year. Some of these missiles were launched separately while others in batches, most notably the launch of 10 ballistic missiles all at once.

Saree also stressed that the Yemeni armed forces have successfully conducted new experiments on missile systems that will be revealed soon.

“We announce today that there are missile systems that will soon be in service of the Yemeni people, God willing, after the success of the experimental operations,” he continued.

He also pointed out that the air force targeted military bases and installations, sensitive targets, gatherings and enemy camps, including targets in the Saudi and Emirati depths. He stressed that there have been major successful operations such as using more than 10 drones in one operation. He continued saying that more than 160 operations have been conducted, including 66 operations in the Saudi depth and 94 operations against hostile local targets this year.

Moreover, he explained that the air defense forces have carried out more than 721 operations since the beginning of the aggression, ranging from shooting down aircraft to confronting and forcing them to leave. More than 371 aircraft have been shot down, including 53 combat aircraft and Apache helicopters, and 318 reconnaissance and spy planes.

The spokesman for the armed forces also said that the air defense operations have been successful at occupying the enemy planes and forcing them to leave in about 350 operations.

Referring to the air defense operations, he confirmed that they had achieved several successes this year, most notably the downing of a Tornado warplane, as well as a number of counter operations.

New air defense systems have entered the battle while other systems are being developed to become more effective on the battlefield, he continued.

“During the past months, our air defenses have carried out 64 operations, including the downing of a Tornado warplane and other resistance operations.

Heading to the navy and coastal defense forces, he explained that more than 29 operations targeted ships, battleships, frigates, boats, the piers of the enemy and thwarted landings operations. Some of the most prominent ships and frigates that were targeted were the Saudi Al-Madina and Al-Damam frigates, not to forge the Emirati warship Swift, and a number of other warships affiliated with the aggression.

The spokesman for the armed forces also stated that the two units were able to destroy and damage more than 8,487 tanks, armored vehicles, machinery, troop carrier, a vehicle and a bulldozer during the confrontations, most of which are American, British or French made.

He also stated that the aggression countries, most notably KSA and UAE, had to purchase additional quantities of weapons worth billions of dollars to compensate for losses.

Additionally, Brigadier General Saree confirmed the killing and wounding of more than 10 thousand Saudi soldiers and officers since the beginning of the aggression, including more than 4,200 dead Saudi officers and soldiers. The losses in equipment and ranks of the Saudi army are the largest among the armies participating in the aggression, he confirmed.

The spokesman for the armed forces also stated that the UAE forces suffered 1,240 dead and injured soldiers since the beginning of the aggression. Meanwhile, the UAE admitted the loss of only 120 of them. As for Sudani mercenaries, their ranks inflicted more than 8,000 dead and injured, including 4,253 dead.

He went on saying that there are people killed in smaller numbers coming from different Arab and foreign nationalities, including countries that officially participated in the aggression.

“The mercenaries affiliated with security companies of foreign nationalities, including South America and Australia, incurred great human losses,” he added.

He said that, under the directions of the leadership, the armed forces are fully prepared to provide assistance to all of our injured Yemeni mercenaries.

The spokesman also mentioned that the economic sector of the aggression forces has been damaged by missile and drone strikes. He indicated that the repercussions and economic damage to the enemy as a result of some of the operations will only further escalate. The operations have also resulted in damage to the Saudi oil sector specifically as well as other vital sectors.

The spokesman also conveyed a message to the Saudi American aggression saying that, “You once targeted us arrogantly and today we are the ones targeting your regions and installations.”

Yemen possesses a strategic stockpile of deterrence weapons, on top of which are ballistic missiles and winged missiles, he affirmed.

He concluded by promising to respond to any attack or war crime conducted by the aggression against Yemen and its people.

American Magazine: Corona a Crisis for Tyrants in the Middle East .. Saudi Arabia and Egypt as Models