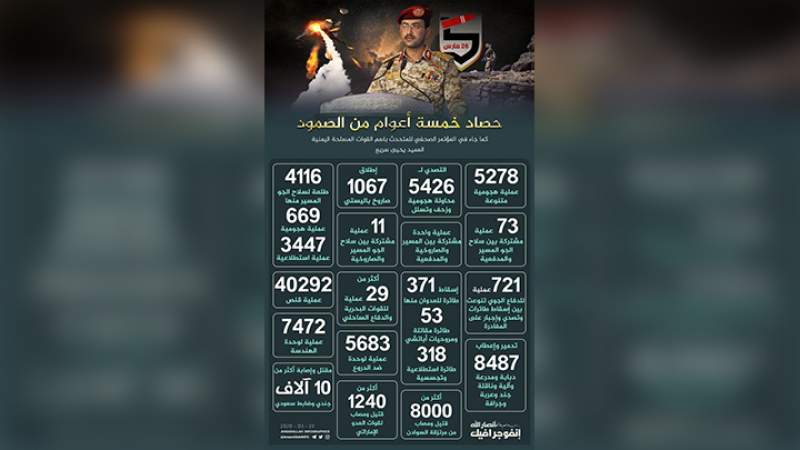 “Yemen, which was bombed and destroyed during the first months and early years of criminal aggression without responding, is no longer the same in regard to military capabilities, and the leaders of the aggression should realize this,” concluded the spokesman of the Yemeni Armed Forces as Yemen enters its sixth year of steadfastness against the aggression.

“The sixth year, if the aggression continues, will be more severe and painful,” he stressed.

During the past year, the operations and capabilities of the Yemeni Army and People’s Committees have doubled significantly compared to the previous four years. “The Yemeni Armed Forces succeeded in carrying out broad and major military operations that imposed new equations in the battle and led to huge losses in the ranks and equipment of the enemy forces. In addition, they were able to liberate large areas in Nehm, Jawf, Marib, Al-Dalea and border fronts.

During a press conference in the capital Sana’a on Monday, 23 March 2020, Brigadier General Saree announced that the missile force launched, during the years of the aggression, more than 1067 ballistic and winged missiles. The missiles were either developed or locally manufactured, of which 410 ballistic missiles bombed military targets and vital installations in the Saudi and Emirati depths.

Regarding the operations of the Air Force, the brigadier general said that 4116 operations were carried out, of which 669 targeted military bases and installations, sensitive targets, gatherings and enemy camps in the Saudi and Emirati depths. This includes 160 during the current year, 66 of which were in the depth of the Saudi enemy and 94 in military targets inside Yemen.

In the face of the escalating capabilities of Yemen, we observe that the forces of aggression are not the same as they once were. More than 250,000 raids were launched by the aggression during four years, out of which only 6656 were launched during the last year. This confirms the influence the Yemeni air defense systems have on the battleground.

Speaking of Yemeni air defense systems, four of which were recently uncovered after undergoing development operations with Yemeni expertise. These systems were capable of downing an enemy Tornado warplane in mid-February in Al-Jawf Governorate.

The data on the ground confirm the growing capabilities of the army and the people’s committees. During the past two months, 227 various offensive operations were carried out, and they were able to liberate vast areas in Nehm, Marib, and Al-Jawf equal to the area of the “Emirates, Bahrain, Qatar, and Kuwait” combined. As a response, the aggression forces launched 48 operations, repelled by the Yemeni Armed Forces, during the first months of 2020.

Moreover, the economic sector of the aggression forces was also affected by missile and drone strikes, especially the Saudi oil sector.

“Brigadier-General Saree concluded his press conference by stressing the “absolute readiness of the armed forces to implement any options decided upon by the leadership during the sixth year of resilience and their full ability to implement operations that cause severe damage to the economy of the aggression countries.”

He also promised to “preemptively strike without hesitation for any upcoming attack or in response to any crime that the aggression may commit against our people and our country.”

Yemen possesses a strategic stockpile of deterrence weapons, most notably ballistic and winged-missiles. The aggression should expect a thousand missiles, such as those that struck its bases and installations within 5 years, but this time in a “much shorter period,” he confirmed.

In conclusion, it appears that the sixth year will be the beginning of what is described as the “great pain” operations against the coalition countries promised by the leader of the revolution, Sayyed Abdulmalik Al-Houthi. Such operations are to take place if the aggression and siege are continued against Yemen. The spokesman also affirmed that the 26th of March 2015, which marks the beginning of the Saudi American aggression, is totally different from the 26th of March 2020.

After Five Years of War, How Will Yemen Face Corona?