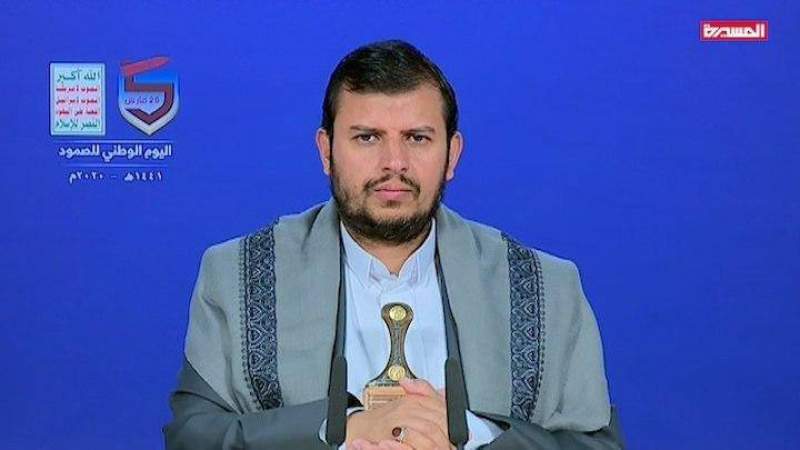 Sayyed Abdulmalik Al-Houthi: In the sixth year, we will confront the aggression with furthe advanced military capabilities and achieve more victories.

Sayyed Abdulmalik Al-Houthi stressed that the Yemeni military industrialization is now producing all kinds of weapons from Kalashnikovs to ballistic missiles and drones in light of the suffocating siege and a difficult economic situation.

“Today, the Yemeni people have developed and diversified military capabilities and produce various types of weapons,” Sayyed Houthi said in a televised speech on the occasion of the fifth anniversary of the National Day of Resilience.

Regarding the security field, Sayyed Houthi said, “the great efforts of the security services faced a fierce war, made great achievements and contributed to the stationing and participation in the fronts.”

“The general evaluation and studies confirm that the economic losses of the Saudi regime are great and that its ambitions have failed,” he said, adding that “the economic situation that the Saudi and Emirati systems suffer from is a period of a deteriorating crisis.”

In his speech, Sayyed Houthi also said that “Yemen witnessed for the past 5 years the fiercest war on the face of the planet; targeting our people under American supervision with the implementation of Saudi Arabia and its allies.”

“Our dear people rewrote history by facing the Saudi American aggression with legendary steadfastness,” he continued.

Moreover, Sayyed Abdulmalik Al-Houthi hailed the position taken by the Yemeni people describing it as “the position of sacrifice” embodied in those on the battlefield first and foremost, as well as the martyred, injured and detained.

Sayyed Houthi also expressed his gratitude toward the Yemeni people working on so many levels and in various aspects in order to confront and defeat the aggression.

Sayyed Abdulmalik Al-Houthi stressed that the enemy has wagered on its great attack, the coverage it enjoys and the many war crimes to weaken our people, break their will, and stirr up internal strife.

It has been ascending

Sayyed Abdulmalik Al-Houthi affirmed that the path of steadfastness was progressive and achieved cohesion that prevented it from completely collapsing. He pointed out that the first results of steadfastness is the cohesion of the state, society and having serious components that confront the aggression.

“What remains of economic cohesion remains for us, which helped us to stand steadfast and resilient,” he said. He added that popular support for the fronts did not stop during the five years despite the hardships the Yemeni people have endured.

The convoys sent for frontlines for support never stopped even from poor families. The frontlines still receive such convoys during the hardest times, which resembles the generosity of the Yemeni people, he mentioned.

Sayyed Houthi explained that the aggression suffered military, economic and other losses and acknowledged its defeats on media. He also noted that the Saudi military failure is a reality despite American protection, ridicule and blackmail.

“There is a political crisis in the Saudi system that has become known to everybody, which is the detentions within the royal family,” he added.

“Unfortunately, the Saudi and Emirati regimes presented in the public mindset that they are worse than Israel and that America and Israel want to present the brutal model of Saudi Arabia and the UAE instead of Israel,” he said.

He continued, “No matter the degree of oppression, you can not only be oppressed to achieve steadfastness and cohesion, you must also be responsible and hard-working.”

Sayyed Abdulmalik Al-Houthi affirmed that Yemen is an agricultural country for various crops and has a diverse environment that helps provide food of all kinds to meet people’s needs. He also called on the merchants to cooperate with farmers and state institutions in order to support, improve and provide local agricultural production.

Regarding education, Sayyed Houthi said that reforming and developing the education sector will help in developing the country and the results shall be seen in all fields.

In a letter to the Saudi American aggression:

Sayyed Houthi called on the aggression countries to stop the war and lift the siege, saying, “there must be a clear position to stop the aggression and not to make misleading statements while continuing with the raids, siege and occupation.”

He also affirmed Yemen’s will of ending the war and achieving peace if the aggression makes a serious practical decision to stop the aggression and lift the siege.

With regard to the file of the prisoners, he stressed Yemen’s complete readiness to complete the prisoner exchange process, which the aggression has consistently avoided.

He also spoke about the mercenaries on Yemeni battlefronts whereas he advised them to respond to the efforts of the National Reconciliation Commission. He confirmed that the aggression humiliates and betrays mercenaries and that they are in a situation they should not choose to stick to.

“What the traitors and the aggression countries conceal is the spread of the Corona epidemic among the traitors on a number of fronts,” he said.

“Our sources confirm to us the spread of the Corona epidemic on Midi front in large numbers,” he continued.

Sayyed Houthi concluded by praising the honorable stances of all advocates and their solidarity with the Yemeni people, foremost of which is the Islamic Republic of Iran. He explains that Iran has taken the most sincere stance despite what it has been going through; it chooses to stand beside the vulnerable.

He also hailed the positive and supportive stance of Hezbollah in Lebanon, the free people in Iraq and Syria, and the rest of the world’s people standing beside Yemen.

Yemen’s South on the Fifth Anniversary of the Saudi American Aggression: Details