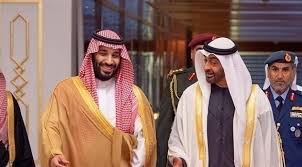 After five years of war and conflict among the tools of the Saudi-led coalition in the occupied Yemeni governorates, the so-called “Southern Transitional Council” affiliated with the Emirati occupation announced its self-management of the areas under its authority in the occupied southern Yemeni provinces.

Such an event marks the first step of a project the coalition has worked to establish in the occupied southern governorates for five years.

Observers believe that the announcement of the Transitional Council for the state of emergency and self-management of the southern Yemeni governorates comes within the framework of a large conspiracy that is managed by the coalition. The project is particularly supervised by Saudi Arabia and the Emirates to divide Yemen into regions and small cantons contending each other.

Observers believe that what is happening today is a result of what the coalition worked on since the first day of its war on Yemen and its control over southern Yemeni governorates. Ever since day one of war, the coalition worked on the establishment of forces and the formation of military militias, names, territorial branches, and external policies outside the authority of the so-called “legitimacy” to ensure the success of the coalition’s schemes and the partition project. All of this is meant to serve the interests of the coalition countries and share the wealth through their agents on the ground.

Among these entities prepared for this purpose is the so-called “Southern Transitional Council”, which the coalition created on the basis of separatism that enjoyed political and military support from the Emirates.

The UAE offered support by arming the so-called security belts, the Hadrami, Shabwani, Mahri, Socatri elites and other armed militias in the occupied governorates of southern Yemen. The multiple armed militias would not have existed without Saudi approval and supervision.

According to the observers, the division and partition project has been agreed upon by both Saudi Arabia and the UAE from the very beginning, despite their difference over the date of announcing this division. Facts displayed a Saudi desire to postpone the announcement of the division project, unlike the UAE, whose intentions was to announce the division quickly.

Additionally, the timing chosen for the interim announcement of self-management of the occupied southern governorates is a proactive step for the partition project desired to be imposed as a fait accompli in the case of engaging in upcoming negotiations. Indicators confirm Yemen’s direction to upcoming political negotiations between parties after the failure of the military intervention in Yemen.

As observers say, the transitional announcement of the so-called autonomous administration of the southern governorates will push other entities to declare self-rule and management, especially in Hadramout governorate.

This means more division and fragmentation that the coalition countries seek to impose in the occupied southern Yemeni provinces, sponsored by the United States and Britain through their Saudi and UAE tools.