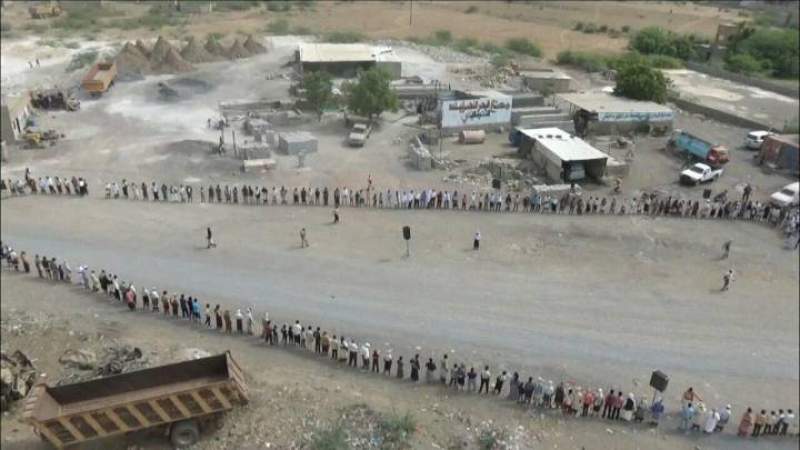 Protestations in Hodeidah to Condemn the Saudi blockade against fuel ships

The people of Bajil, Al-Mghafil, and Al-Munirah districts in Al-Hodeidah governorate, last Friday, went on massive tribal protests, in which they condemned the continued intransigence of the countries participating in the aggression (coalition) for detaining oil tankers and preventing them from reaching the port of Al-Hodeidah.

The statements issued during the protests considered that the crimes and violations suffered by the Yemeni people for more than five years amount to war crimes and crimes against humanity.

The protesters stressed in their protests that the seizing of oil ships by the Saudi-led aggression will result in a humanitarian crisis. It will also have major effects on the economic sector and hospitals, especially dialysis center, n light of the spread of diseases and epidemics, which is recognized as a crime according to all international and humanitarian laws and norms.

Moreover, the statements also held the United Nations and the UN envoy to Yemen, Martin Griffiths, the full responsibility towards the consequences of the blockade against oil tankers. The statements also slammed the shameful and suspicious silence by the UN that has not stopped the Saudi aggression from practicing piracy on fuel ships and refusing their entry to the country, which affects citizens, especially the thousands of patients in hospitals in all governorates of the Republic.

The protesters pointed out that the Saudi-led coalition of aggression insisting to commit this crime and preventing the entry of oil derivatives constitutes a clear violation of Sweden’s agreement and violates all internationally recognized laws.

On the other hand, the protester praised the great and continuous victories of the army and the people’s committees, primarily the missile force and the air force for the “fourth deterrence balance” operation, which targeted strategic sited deep in the Saudi capital.