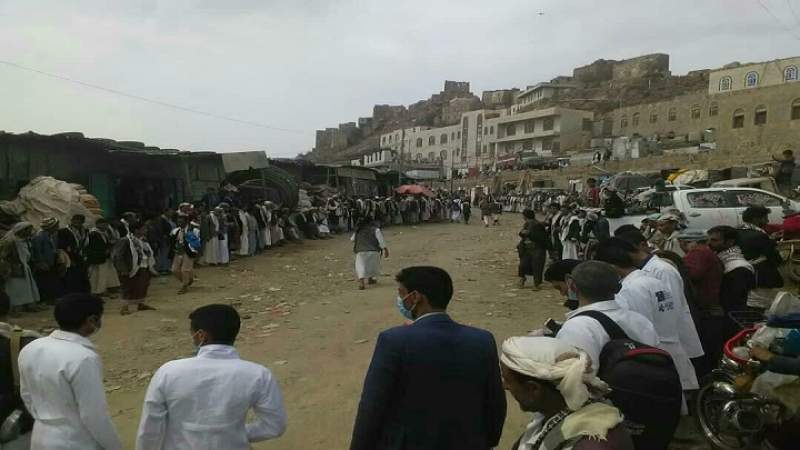 Hajjah: A Tribal Protest Against the Saudi Aggression, Siege and Crimes

The people of the district of Kahlan Al-Sharaf in Hajjah governorate carried out an armed protest today, denouncing the crimes committed by the US-backed Saudi-aggression and their mercenaries, as well to affirm their continued support to frontlines with financial aid, recruited men and weapons.

During the protest, which was attended by the Director-General of the district, Abdullah Al-Shahari, the attendees condemned the crime of the Saudi-UAE paid mercenaries on the Al-Suba’yan family in the Ma’rib governorate, which resulted in killing a number of people, including children, who all were from the family of Sheikh Muhsin Suba’yan.

The tribes announced public mobilization and support to the fighters within the frontlines to help in defeating the invaders, traitors and occupiers from their land.

They also renewed their rejection of the brutal practices by the Saudi-led aggression against the oil derivative tankers trying to enter Yemen, which were prevented and seized by the navy of the Saudi aggression, although they were given permits after their full inspection by the United Nations.

Finally, protesters braised the political and revolutionary leadership and the great victories achieved by the Yemeni army and the popular committees, the missile force, and the air force on all fronts, the last of which was the “fourth deterrence balance” operation that targeted vital sites within the depth of the Saudi kingdom.