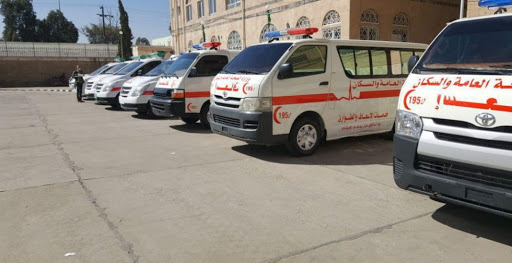 Ministry of the Public Health and Population in Sanaa said on Saturday that 800 patients are at the risk of death daily in the event of the cessation of the emergency sections in hospitals due to the lack of oil derivatives.

Deputy Director-General of the Emergency and Ambulance Sector at the Ministry Abdulkarim al-Nahari announced the entry of the critical phase after two weeks of almost complete cessation.

Al-Nahari confirmed, in a statement to Al-Masirah TV channel this evening, that the emergency and ambulance departments in public and private hospitals consume 2.9 million liters of diesel per month, while ambulances consume 200,000 liters of gasoline.

“The Yemeni Petroleum Company has provided us with 50 percent of the required quantity per month and informed us that its diesel reserves are running out because of the aggression coalition’s continued detention of oil ships,” Al-Nahari said.

He referred that the Ministry of Health has 500 ambulances operating in hospitals, performing 1,700 emergency trips per month and consuming 200,000 liters of gasoline, which are threatened to stop.

The oxygen plant at Al-Thawra Hospital in Sanaa stopped work last week and it was restarted with the available diesel quantity and faces the specter of a final halt, he added.

July/25: An Update of the Saudi Crimes, Violations in Yemen