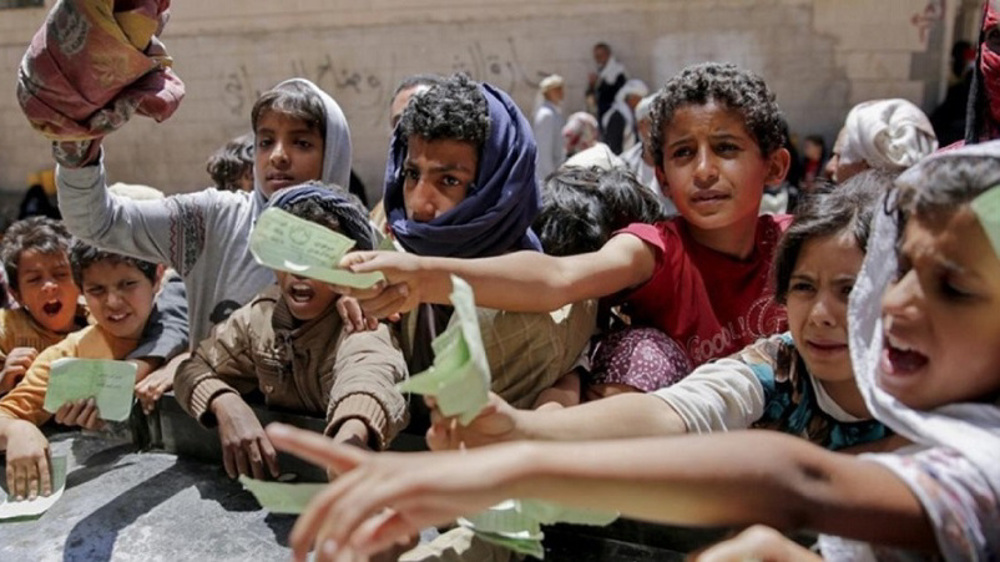 United Nations agencies warn of an “alarming increase” in the number of people facing “acute food insecurity” in Yemen amid a crippling siege by the Saudi-led military coalition and the coronavirus pandemic.

The grim analysis was made public in a Wednesday report by the World Food Programme (WFP), the UN Children’s Fund and the Food and Agriculture Organization.

According to the report, the overall economic decline made worse by the Saudi-led siege and the coronavirus pandemic, coupled with flash floods and desert locust invasions, are threatening to reverse hard-earned food security gains in the warn-torn peninsular Arab country.

The analysis, conducted in 133 districts in southern Yemen, forecast that the number of people facing high levels of “acute food insecurity” will rise from two million to 3.2 million in the next six months.

“The people of Yemen have already been through a lot and are resilient. But they are facing now too many hardships and threats all at once – from COVID-19 to Desert Locusts invasions. Small-holder farmers and families who depend upon agriculture for their livelihoods need our support now more than ever,” said FAO Representative in Yemen Hussein Gadain.

The expected jump in food insecurity would mean that 40 percent of the population would be affected from July through December, a 15 percentage-point increase from the first six months of the year.

“We must act now. In 2019, tanks to a massive scale-up, WFP and partners were able to reverse the deterioration in the worst-hit areas of Yemen. The warning signs have returned and with coronavirus pandemic added to the mix, it could get a lot worse if humanitarian action is delayed,” said Laurent Bukera, the WFP country director in Yemen.

Separately, Lise Grande, the UN humanitarian coordinator for Yemen, also said that Yemen was again on the brink of a major food security crisis.

“Unless we receive the funding we need now, we won’t be able to do the same this time,” she added.

Saudi Arabia invaded Yemen in March 2015 to restore power to its former regime and crush the popular Houthi Ansarullah movement, whose fighters have been of significant help to the Yemeni army in defending the country against the invaders.

The ongoing war has killed tens of thousands of Yemenis and pushed the entire country close to the brink of famine. The brutal military intervention has also taken a heavy toll on the country’s infrastructure, destroying hospitals, schools, and factories.

The imposed war initially consisted of a ceaseless airstrike campaign but was later coupled with a crippling naval and aerial blockade and the deployment of ground mercenaries to Yemen.

The blockade, particularly on Hudaydah port city, a lifeline for the impoverished nation, has also left the country highly vulnerable against the COVID-19 pandemic.

The UN Warns of a New Hunger Crisis in Yemen