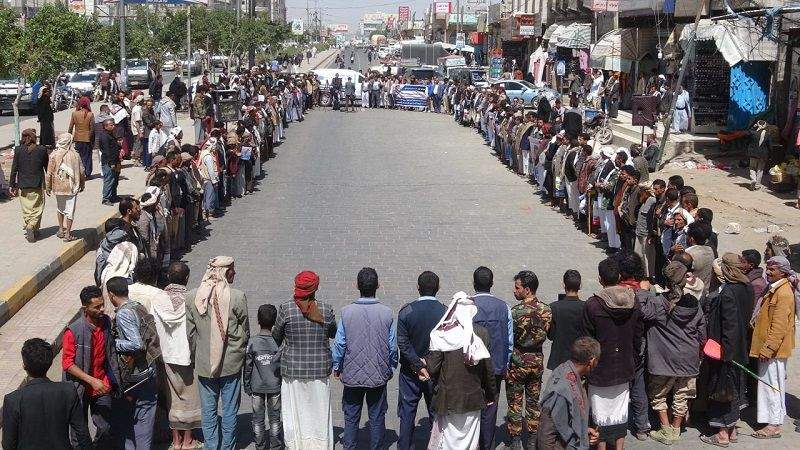 Protest in Dhamar gov. against the Saudi regime’s execution of the Al-Moalemi.

An organized protest took place in Dhamar on Monday by human rights organizations, civil society and activists, to denounce the crime committed by the Saudi regime for executing the young man, Mohammed Abdul Baset Al-Moalemi.

In the stand, a member of the Shura Council, Hassan Abdul Razzaq, affirmed the denunciation of the political and social forces in the governorate for this crime, which is inconsistent with international and humanitarian laws.

He pointed out that this crime is not merely against Al-Moalemi, but against all Yemenis, calling on international organizations concerned with human rights to open an investigation into all the crimes committed by the Saudi regime against the Yemeni people.

In turn, the governorate’s deputy, Abbas Al-Amdi, stressed that this crime is inconsistent with international humanitarian norms and covenants, indicating that what the young Al-Moalemiwas subjected to is part of the violations that the Saudi regime practices against expatriates and the Yemeni community on an ongoing basis.

He affirmed the family’s adherence to its right to sue the Saudi regime, calling on human rights and humanitarian organizations to work on prosecuting the Saudi regime for this crime and other crimes committed in front of the eyes and ears of the international community.

The statement of the protest called on the international community and the United Nations to assume their responsibilities in deterring the Saudi regime and end its arrogance by bringing it to trial.