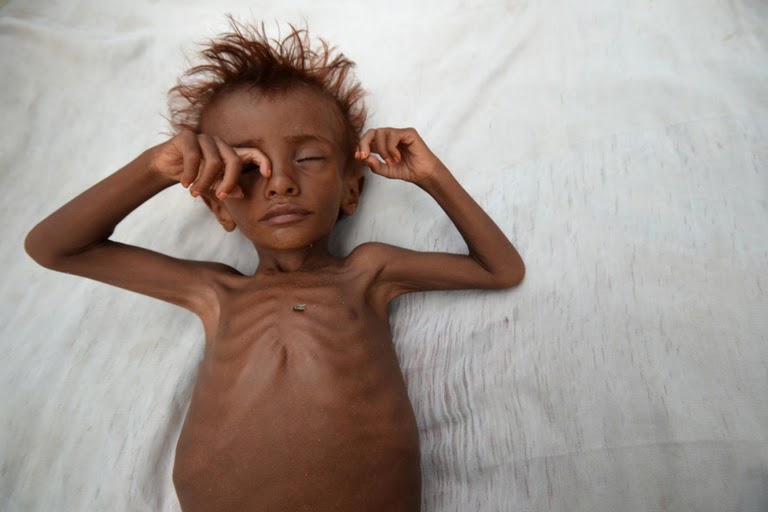 US-Saudi Blockade on Yemen may Result in Worst Famine in Decades: UN

“It will be the largest famine the world has seen for many decades, with millions of victims,” Yemeni journalist Afrah Nasser warned.

The United Nations, along with dozens of other aid groups, are raising alarm at the blockade imposed on Yemen by the the U.S.-backed, Saudi-led coalition there, saying Thursday it could lead to “the largest famine the world has seen for many decades.”

Should Monday’s blockade – that saw the coalition force the closure of all of Yemen’s borders – continue, says the U.N., it would bring millions of people closer to “starvation and death.”

Aid groups report that food supplies are expected to run out within six weeks, while vaccines against disease are likely to last only a month. Medical experts also warn that the blockade will worsen the country’s cholera outbreak, which has affected almost 1 million people.

There will be a famine in Yemen,” Afrah Nasser, an independent Yemeni journalist, told Democracy Now!. “It will not be like the famine that we saw in South Sudan earlier in the year where tens of thousands of people were affected. It will not be like the famine which cost 250,000 people their lives in Somalia in 2011. It will be the largest famine the world has seen for many decades, with millions of victims.”

At least 10,000 Yemenis have so far been killed in the conflict, with 40,000 more wounded. The cholera outbreak triggered by the war, in turn, has left more than 70 percent of the population in need of emergency aid.

In response to the blockade, Iranian Foreign Minister Javad Zarif, said the Saudi kingdom “bombs Yemen to smithereens, killing thousands of innocents including babies, spreads cholera and famine, but of course blames Iran.”

“It is engaged in wars of aggression, regional bullying, destabilizing behavior and risky provocations. It blames Iran for the consequences.”

War on Yemen Will Put an End to Saudi Monarchy: Abid Hussain From Kashmir