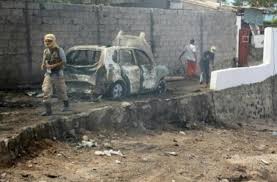 South of Yemen suffers under the occupation of the UAE

Two assassinations within 24 hours, one of which is the first in the province of Mahrah and the other in the city of Houta Shabram Hadramout.

Chaos is rampant throughout the provinces under the control of the invading forces until assassinations have become common news.

Yesterday, gunmen assassinated a mosque imam in the city of al-Ghaydah, the capital of the province of Mahara, a few weeks after the field movements of the UAE occupying forces to enter the city.

The other is an officer working in the recruitment of the so-called elite of the Hadramiya, which follows the UAE after being followed by gunmen on Sunday afternoon before being shot in the center of the city of Huta in the city of Shibam, Hadramout province.

All the interpretations go to confirm the fall of these provinces in the midst of a growing and multi-directional conflict. Just as al-Qaeda is active, it has acquired weapons from the countries of aggression, and other counter-groups are active. It is also working in favor of the UAE, as is the case for the so-called elite of the Hadrami and third and fourth groups working for other regional and international agendas. Including Saudi Arabia and Qatar.

The current security situation confirms that there is no stability until further notice, the list of those who have been assassinated in the past two and a half years by hundreds, including those affiliated with the Salafi movement.

Moreover, it is unfortunate that no one is working to change the current situation. Everyone is working to strengthen his influence and his position in the midst of a complete absence of a national project that protects citizens who pay the price of their security and stability.