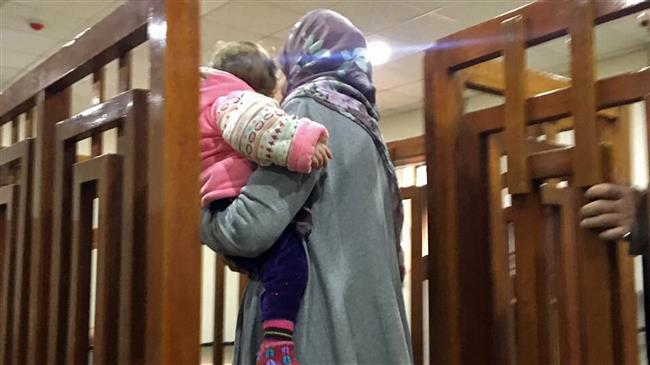 The sister of a former al-Qaeda leader in Iraq who was killed in 2010 has been sentenced to death in a Baghdad court on terrorism charges, including collaborating with militants in terror operations.

The conviction was announced in a Thursday statement issued by Iraq’s Supreme Judicial Council spokesman Abdul-Sattar Bayrkdar, saying that Abu Omar al-Baghdadi’s sister was found guilty of “offering logistic support and help to (terrorists) in carrying out criminal acts.”

According to the statement, other charges cited for the conviction of the woman — whose identity is yet to be disclosed — include “distributing money” among the terrorists in Mosul, which was overrun in 2014 by Daesh-led militants who engaged in a terror campaign in the northern Iraq city and its surrounding regions for over three years.

Bayrkdar said the woman’s husband was also a member of the al-Qaeda leadership, who was sentenced to death earlier.

However, he did not elaborate on the nature of other charges and the years the woman had collaborated with the al-Qaeda in Iraq.

Al-Baghdadi, according to the report, was killed in April 2010 along with Abu Ayyub al-Masri, another key al-Qaeda leader based in Iraq, during an operation by Iraqi forces.

The statement by Iraq’s judiciary spokesman initially identified the convicted woman as the sister of Abu Bakr al-Baghdadi, the shadowy leader of the notorious Daesh terror group.

Daesh emerged from al-Qaeda in Iraq, which was linked to the main group famously led by Saudi national Osama bin Laden, who was reportedly killed in Pakistan in a covert operation by US forces.

In mid-2014, Daesh controlled vast areas in northern and western Iraq, including Iraq’s second-largest city of Mosul, which was under the militants’ rule for more than three years.

The Iraqi military declared victory over Daesh last December, after driving out the notorious militants from northern and central Iraq. Hundreds of women, including foreigners, were taken into custody by Iraqi forces during the operations that liberated the regions under Daesh occupation.

The whereabouts of Abu Bakr al-Baghdadi remain unknown despite a number of rumors that he was killed or injured during airstrikes and ground battles both in Iraq and Syria.

Baghdadi suddenly emerged as Daesh leader a year after he was allegedly captured and held captive by US military forces that occupied Iraq in 2003 and remained there until 2014.