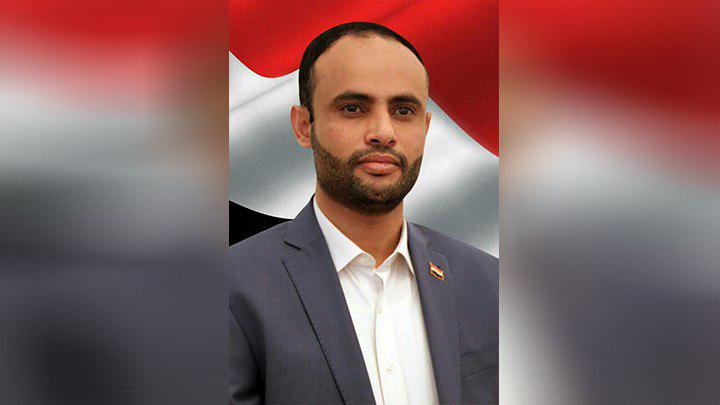 President Al-Mashat, President of the Supreme Political Council, delivered a televised speech, in conjunction with the popular celebrations in Yemeni provinces on the occasion of the fourth anniversary of the September 21st revolution, also known as the revolution of Ansarullah.

The Supreme Political Council is considered to be the highest authority in the country with the support of the House of Representatives in the capital Sana’a.

The Yemeni president al-Mashat mentioned the internal security affairs in his speech, where he directed the Internal Ministry to improve conditions for all prisoners as well as accelerate the release of all political and media-related prisoners unless they are involved in criminal or state security cases.

The Yemeni president also called upon the international community to take immediate action in order to put an end to the world’s worst humanitarian catastrophe and the daily Saudi war crimes.

“We call upon the international community to discharge its responsibilities towards the horrendous crimes and the egregious violations committed by the US-backed Saudi-led coalition against the Yemeni people,” the president said during his speech.

The impoverished country of Yemen has been facing an atrocious Saudi war, which has driven the country into an unprecedented cholera outbreak, famine and inflation. The Saudi-led coalition, backed by the US/UK/UAE, has been accused of committing massacres against various innocent civilians.

Speaking of civilian casualties, the Saudi-led coalition lately committed what is described as the “worst attack against children” where it targeted a school bus heading for a summer trip. The attack left 51 killed and 79 injured, according to the Health Ministry.

Watch the aftermath of the school bus crime (graphic):

American news network CNN confirmed the bomb used by the Saudi-led coalition to hit a school bus in Yemen, which killed 51 civilians including 40 children, was sold as part of a US State Department-sanctioned arms deal with Saudi Arabia.

CNN cited munitions experts as saying that the weapon massacred Yemeni children dead on August 9 in Saada province was a 500-pound (227 kilogram) laser-guided MK 82 bomb made by Lockheed Martin, one of the top US defense contractors.

The image of the missile fragment, which was among those that scored a direct hit on the school bus traveling through Dahyan market, was first time uploaded by Sanaa-based journalist Hussain Albukhaiti and quickly spread online over the weekend. The prominent Yemeni journalist who throughout the war has been instrumental in getting images and information out of the country ahead of Western journalists has photographed and examined fragments from one of the exploded missiles found at the site of the US-backed Saudi-led coalition air raid.

The bomb is very similar to the one that wreaked devastation in an attack on a funeral hall in Yemen in October 2016 in which 155 people were killed and hundreds more injured. The Saudi coalition blamed “incorrect information” for that strike, admitted it was a mistake and took responsibility.

In March of that year, a strike on a Yemeni market — this time reportedly by a US-supplied precision-guided MK 84 bomb — killed 97 people.

Following the bombardment of the funeral hall and the appalling aftermath, former US President Barack Obama banned the sale of precision-guided military technology to Saudi Arabia over “human rights concerns.”

The ban was overturned by the Trump administration’s then-Secretary of State Rex Tillerson in March 2017.

Going back to the president’s speech, he also expressed gratitude towards the efforts undertaken by several humanitarian organizations to cease the nearly four-year war. He specialized his thanks for the recently released report supervised by the UN Experts Team, whereas it confirmed war crimes are being committed by the Saudi-led coalition in the southern Arabian peninsula country.

The UN team of experts, which has been appointed by the Human Rights Council, confirmed that coalition raids in Yemen hit residential areas, markets, funerals, weddings, prisons, fishing boats and even medical facilities, causing civilian casualties.

The Arab Organization for Monitoring Rights (Arwa) said in a statement that the experts’ report included conclusions and recommendations after it has looked at the violations in Yemen that go against the international human rights law and other international laws.

The report referred to the barbaric violations against humanity, the deprivation of the right of living, arbitrary detention, rape, torture, ill-treatment, kidnapping, child recruitment; violations against free expressions and economic, social and cultural rights as well as the right to an adequate standard of living and the right to health, where the aforementioned violations were mostly committed by the Saudi-UAE coalition.

According to the organization, the team reviewed 60 incidents in which air strikes on residential areas killed more than 500 civilians, including 84 women and 233 children. In addition, it reviewed 29 more incidents, where air strikes were conducted on public places and areas crowded with civilians. Experts concluded the deaths of more than 300 civilians.

Moreover, the experts also reviewed 11 incidents involving air strikes on markets that killed hundreds of civilians as well as four raids on detention facilities since the conflict began, which resulted in the killing of more than 105 civilians, most of whom were detained.

Meanwhile, 11 airstrikes targeted fishermen boats off Hodeidadh cost, which were founded by the team, and about 40 fishermen were killed or disappeared, the team said. Additionally, 32 cases were reviewed, where medical facilities, as well as educational, cultural and religious sites, were destroyed by air strikes throughout the war.

The organization noted that the number of civilian casualties led to the Panel’s skepticism about the nature and effectiveness of any assessment of proportionality and any precautionary measures adopted because of the timing of some attacks and weapons used.

According to the report, the coalition has been committing additional acts that may also amount to war crimes, including enforced disappearances, cruel treatment, torture, assault on personal dignity, rape and the recruitment of children under the age of 15 or their active participation in hostilities.

The Panel of Experts also investigated the sexual violence, including the rape of adult detainees, women and children abducted by individuals from the UAE and its established forces dubbed the “Security Belt.”

“Although the decision to appoint the eminent panel of experts was a step in the right direction, as reported by the Arab Organization for Monitoring Rights, it falls short of the standards of accountability that can only be achieved by establishing an independent international commission of inquiry and transferring the case to the criminal court or to bring a case before a national court of competent jurisdiction,” the organization added.

“Given the findings of the report – because of the horrendous crimes that continue even with the expert group investigations – a longer wait would allow for impunity and more crimes against innocent people in Yemen,” the organization confirmed.

Speaking of independent investigations, the president also said, “we stress the urgent need to form international committees to investigate in the US-Saudi war crimes in Yemen.”

Currently and although the Yemeni war has been forgotten on mainstream media, people in countries like Britain and Germany are demanding an end to arming the Saudi Kingdom and its war against Yemen.

Finally, he affirmed his keenness for any just solution that would lead to an end to the war and peace within the country.

Saudi Dilemma and UN Investigation on the War on Yemen: Report