The world is once again witnessing an increase of American lies, as members of the US State Department are escalating anti-Russian and anti-Syrian speech, which is about the use of chemical weapons in Syria. Ambassador Nikki warned Syria, Iran and Russia of that they will be held accountable for using chemical weapons in Idlib against innocent people, but no evidence was provided to justify her threats.

In this regard, “South Front” site said America carried out cruise missile strikes on two previous occasions, and every time there weren’t any evidences to prove that the Syrian government used chemical weapons to attack civilians, and there were no evidence given to justify the clear crime committed by the US on those occasions. Now, the United States and Britain are trying to accuse the Russian government of using chemical weapons in an alleged attempt to assassinate a Russian citizen on the land of Britain,  but again no real evidence was provided.

It is important to notice that there is no legal commitment by America itself to eliminate its chemical and biological weapons capabilities. This is not censorship, but we are talking about the imperial hypocrisy of America and the recognition that it is alone the biggest perpetrator of nuclear weapons and its proliferation for more than 50 years. Nowadays, it has the largest stockpile of chemical and biological warfare agents on the planet and continues to expand and develop its biological weapons research on a much larger scale than any other country.

History of using chemical weapons, complicity in the war crimes

International commitments and the Organization for the Prohibition of Chemical Weapons

Russia is one of 192 (governmental and non-governmental parties) which signed the Chemical Weapons Convention of 1993 along with America. On September 27, 2017, Russia and the Organization for the Prohibition of Chemical Weapons announced that Russia was studying the complete destruction of its large chemical weapons stockpile, dating back to the Soviet Union, estimated at 39,967 tons of chemical factors, Russia was obliged to do so by 2020, but it was able to accomplish the task three years earlier than originally planned deadline. Under the original agreement, both America and Russia were required to do so by 2007, but both countries needed to extend the deadline. 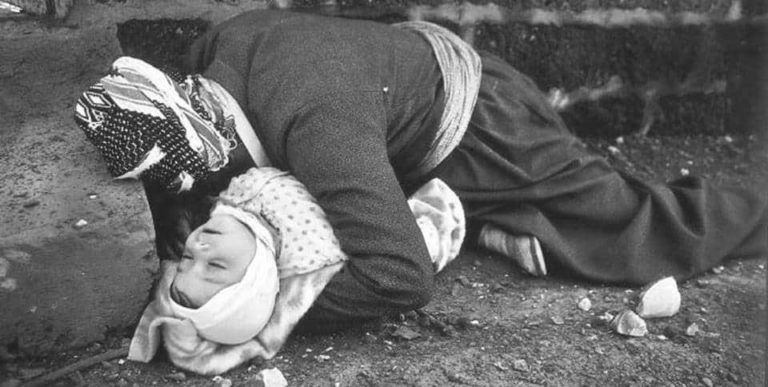 It added that although the United States admitted a total stockpile of 28,000 metric tons of chemical factors, it admitted the destruction of 90 percent of its chemical arsenal. America has requested an extension until 2023 to destroy 100 percent of its chemical weapons, whereas the only other side which signed the law is Iraq . It should be said that many of the chemical weapons in the Iraqi arsenal are based on chemical warfare factors supplied to the regime of Saddam Hussein at the height of the Iran-Iraq war by America and other Western countries. Saddam used some of weapons supplied by America to kill thousands of Kurdish Iraqis in the town of Halabja in 1988, with estimates ranging from 3,000 to 7,000 dead and more than 10,000 injured.

Not only did America and France provide chemical weapons to Saddam’s regime, but US intelligence agencies supplied the Iraqi army with vital information about the battlefield, including satellite images of their aid in the war. America was well aware that Saddam’s regime used chemical weapons in at least four attacks during the war, of course they knew, they facilitated the transfer of these weapons to help the Iraqis pursue the war against Iran. Secret CIA secret documents clearly revealed that America is well aware that the Iraqis used the chemical weapons for at least four times between 1983 and 1988, and Iran has accused Iraq of using chemical weapons and tried to show the issue to the United Nations, but the United States declined to consider and continued to help its ally in the commission of these crimes against humanity.

The United States Ambassador to the United Nations, Nicky Haley, has repeatedly lied before the UN Security Council and the General Assembly as she stated that President al-Assad used chemical weapons against his people in Ghouta in 2013, in Khan Sheikhan in 2017, and in Doma in 2018, but without evidence, except for social media sites whose authenticity is questionable. She also stated that America is certain that the Syrian government is the one which used the chemical weapons, since no other party in the conflict zone could have chemical weapons, but the problem is that America and the Organization for the Prohibition of Chemical Weapons made sure that Syria destroyed or handed over all elements of chemical weapons earlier.

The Organization for the Prohibition of Chemical Weapons and the United Nations made sure that the opposition forces inside Syria used chemical factors as weapons on many occasions during the conflict. The former field investigator for the organization in Syria Jerry Smith told the BBC that he found it unlikely that the government committed these chemical attacks.

The site indicated that the last country in the world to be allowed to account anyone of having and using mass destruction weapons is America. America isn’t the only country in history which target civilians who have multiple nuclear bombs, but it used chemical weapons against the people of Southeast Asia and Iraq in the past. They were smart enough not to use mustard gas and anthrax, but the cumulative effects of the orange agent and enriched uranium in these populations were devastating and would not only cause great harm and pain to the population but would leave the land poisoned for generations whereas America sprited  large amount of TCDD (tetrachlordibenzo-para-dioxin), a first-class carcinogen all over Vietnam, Cambodia and Laos in an attempt to create a forest environment, which was banned in America in 1970, known as Orange Agent, despite the difficulty of recognizing it, its devastating effects of exposure to dioxins in the Vietnamese population can be easily identified, whereas the same effects were observed in American combatants who returned to their homes after being exposed to the poison. There are abnormally high levels of various cancers and debilitating birth defects in South East communities Asia in areas with high use of the orange agent, while dioxins remain in the soil and water, where they do not degrade naturally, and Bio-dioxins accumulate in the animal’s fatty tissues and therefore remain in the food supply

America learned little about the crime which it committed in South-East Asia ,and it was clear that it wasn’t worried because it repeated a similar crime in successive wars of Iraq after America had failed to achieve its goal of defeating Iran through its brutal Iraqi agent, even after helping Saddam Hussein’s regime in attacks of the chemical weapon war against the Iranian soldiers and Iraqi Kurdish civilians, whereas America largely ignored many atrocities committed by one of its favorite dictators, and invaded Iraq in 1991, which witnessed the intensive use of rounds of shields depleting uranium, depleted uranium was very dense, which is good to break the reinforced steel or composite armor. The subsequent invasion of 2003 led to more death as well as destruction, and more depleted uranium.

Nicky Haley has failed to admit the historic role of the US government because it has supported the world’s most horrific systems in the past, Saddam Hussein, and many of the world’s most vile human rights violators. However, Nikki Haley still has the arrogance and illusion that America has the highest moral ground.