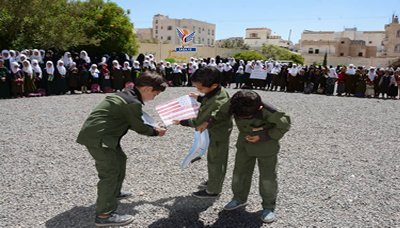 A number of schools in Bani Matar and al-Hesn districts of Sana’a province on Tuesday held protests against the continued Saudi-led war and economic siege.

Teachers and students of schools in the two districts called on the international community, the Security Council and the United Nations to compel the Saudi-led coalition into stopping the war and lift the siege.

The participants in the protests held the US and the great powers responsible for the coalition’s continuation in committing the most hideous massacres against Yemeni children, women, and innocent civilians and the use of the economic war and its repercussions on the national currency.