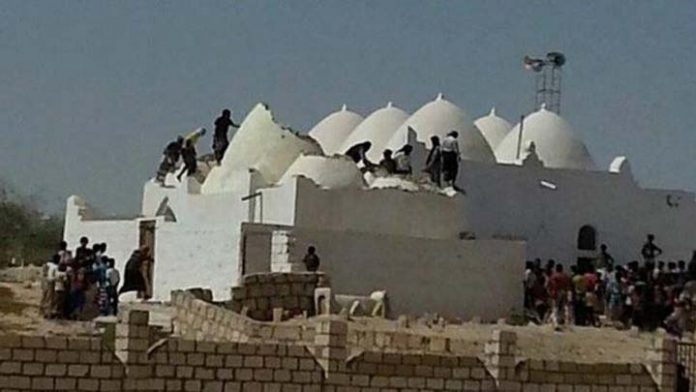 Yemeni history between the jaws of the Saudi-led coalition

number of extremist elements belongs to the forces of Hadi destroyed one of the historic domes in Tor Baha Directorate of Lahj province, local sources reported.

According to the the sources, extremist elements joining the forces of Hadi destroyed a historic dome in the area of Shaab district of Tor Baha district.

A number of domes and historic shrines in the areas under their control were demolished, amid the absence of security.

Earlier this year,the Ministry of Tourism condemned the terrorist bombing, that took place on Thursday, on historic buildings and landmarks in the city of Shibam Hadramout, a UNESCO World Heritage City.

The ministry said in a statement that the bombing caused serious damage to the Royal Palace building, which is one of the famous historical landmarks in the city of Shibam, in addition to the historic Maarouf Mosque and neighboring buildings and houses of citizens.

The statement held the coalition responsible for targeting and destroying Yemen’s historical monuments.

The Parliament reviewed a part of report of the committee on information, culture and tourism on the violations committed in Yemen’s historic cities and the warning issued by UNESCO’s warning to place them on the World Heritage List at risk.

The parliamentary committee’s report indicated that the irregularities are concentrated in the Old City of Sanaa, the historic city of Zabid, the city of Shibam Hadramout and the province of Socotra Archipelago.

Yemenis got stolen by this in southern Yemen