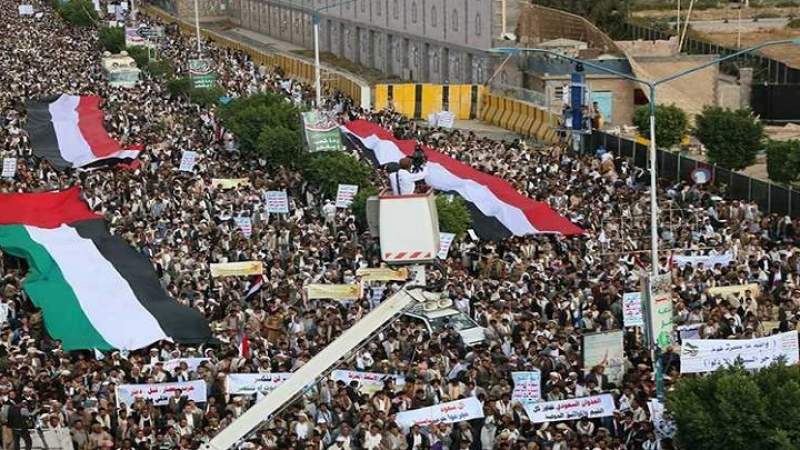 A mass protest was held Friday to reject of the so-called ” the century deal” which was announced by US President Donald Trump last Tuesday.

Participants stressed that Trump deal will not achieve its conspiratorial goals that are in the interest of the usurping Zionist enemy entity and will fail as other deals have failed.

For his part, a member of the political bureau of the Islamic Jihad Movement, Khaled Al-Batsh, delivered a speech during Sana’a protest via a television circle from Gaza, praising the Yemeni people, saying, “We see in Sana’a pictures of the near victory.”

Al-Batsh pointed out that the enemies wanted to ignite our Arab countries with fighting while the Zionist entity remains safe, stressing that we will not bargain on our land and our Quds even if we sacrifice ourselves.

In turn, a member of the political bureau of Hamas movement, Dr. Mahmoud Al-Zahar greeted all the participants in the protests that came out under the title “No to Trump deal”, affirming that Yemen was not occupied by an occupier, and everyone who entered it was destroyed, and the Yemenis today are raising their voices against Trump’s deal.

Mahmoud al-Zahar said: ” we will thank the great Yemeni people when victory and liberation come”,  pointing out that Trump has failed in his elections and wants to renew his mandate at the expense of our land and our sanctities.