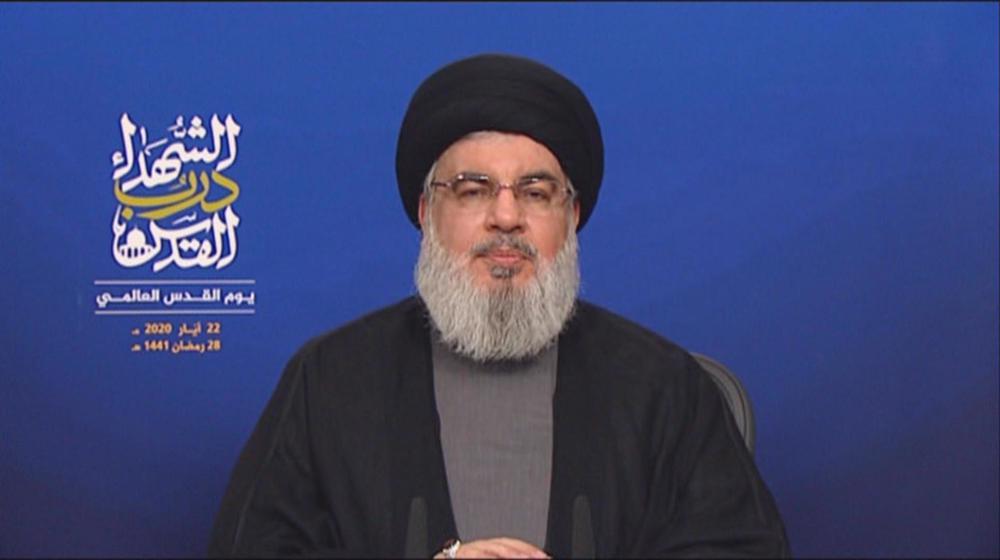 Sayyed Nasrallah: Yemen has a military force capable of liberating regions as massive as countries

Hezbollah Secretary-General, Sayyed Hassan Nasrallah, assured that Yemen now possesses a military force that has proven its capability of liberating areas as massive as countries.

Sayyed Nasrallah said in a televised speech on the occasion of the International Day of Al-Quds, Friday, that the war in Yemen aims to prohibit the impoverished country from using its strategic location for its own benefit.

Sayyed Nasrallah also stressed that the position of the resistance in Lebanon regarding the Palestinian issue is a legal and ideological one that is not interchangeable nor is negotiable. He further explained that restoring the land of Palestine is considered a primary responsibility for the Palestinian people and the rest of the nation as a whole.

He continued by stating that resistance in all its forms is the only way to restore rights and that the real battle in the region is with the United States of America.

“The meetings of some rulers with Netanyahu are due to the illusion of some regimes as they attempt to satisfy the United States of America,” he affirmed.

Meanwhile, he noted that Iran is the most targeted by the American-Israeli axis because of its substantial role in the axis of resistance.

Referring to Iran, he explained that the last Israeli bet was an economic collapse as a result of the Coronavirus.

Heading to make statements on Iraq, Sayyed Nasrallah spoke that a major shift had occurred in favor of the axis of resistance that will not favor the Israeli enemy.

As for Syria, he considered that it had won the war and is only finishing up some final battles for “full recovery.”

He said that the choice of imposing sanctions is what the United States bets on Iran, Yemen, Syria, Lebanon and other arenas, pointing out that the blood of Hajj Qassem Soleimani and Hajj Abu Mahdi al-Muhandis will only bolster the will of the resistance.

Sayyed Nasrallah also stressed that the Palestinian resistance force in Gaza had grown and the blockade of Israel had failed to contain it, adding, “The courage we see in the men of Al-Quds and the West Bank reflects the resilience of the Palestinian people.”

He pointed out that the Israeli does find Trump’s presence in the White House an opportunity for further steps.

He explained that the options of the American military wars in the region are excluded and their focus is currently on psychological and economic wars.

“The rules of engagement with the enemy are still in place and the latter should not read a mistake in the determination of the resistance,” he said.

To conclude, the Hezbollah Secretary-General, Hassan Nasrallah, pointed out that the founders of the Deal of the Century are currently dealing with crises and predicaments which translates into greater chances for resistance if responsibility is to be held properly.