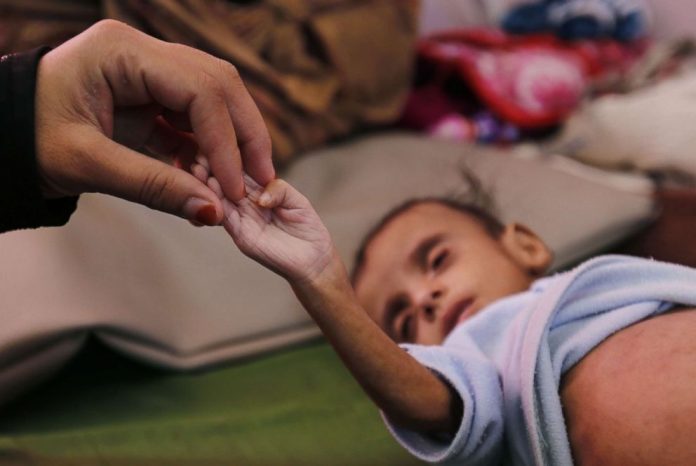 A child under the age of five dies every 12 minutes in Yemen due to the humanitarian crisis caused by the US-Saudi aggression, Achim Steiner, the representative of the United Nations Development Program (UNDP) in Yemen, said Wednesday.

“A child under 5 years of age dies every 12 minutes in Yemen, mostly as a result of lack of water, basic nutrition, health care and medicines due to the conflict,” Steiner said in a tweet.

Yemen is experiencing the largest humanitarian crisis in the world because of the US-Saudi aggression against Yemen for nearly five years.

Lacking body-mass and unreal weights, this is how Children looked like in malnutrition departments in Yemeni government hospitals. They face these complications in the provision of health care as required due to lack of medical supplies and the influx of medical conditions on an ongoing basis.

“The department receives from 30 to 35 cases and we have only 24 beds,” said Dr. Amin El-Ezari, who is in charge of the malnutrition department at Al-Sabaeen Hospital.

Officials at the Yemeni Ministry of Health confirmed high indicators of malnutrition among children in various regions as a result of deteriorating living conditions, cuts in salaries and the continuation of the Saudi blockade, which leads to serious long-term health complications for these children, such as immunodeficiency, weak organ functions, low level of intelligence and others.

A press conference was held in Hodeidah province on Thursday to highlight the rape and abduction crimes that are committed by Saudi-Emirati coalition forces against women and children in the province.

In the conference, Acting Governor Mohammed Ayash Quhim praised the conference idea to review the coalition crimes in the west coast, including the rape of women and children, the abduction of men, and to expose the aggression forces before the United Nations.

For her part, Director of the Human Rights Office in the province Amal Ma’jam said that the crimes and violations of the aggression coalition, the latest of which was in Tuhita district, were not the first in full view of the international community, which did nothing to stop and hold perpetrators accountable.

Fabricating crises is a method used by the coalition of aggression and its mercenaries to put pressure on civilians. The siege imposed on the city and the control of people’s livelihood have made famine very widespread among the population, especially the majority of children.

Khawla, the slender body that fights death, is a testament to the brutality of the siege and the death of the international conscience, which is silent on many of these situations.

Awsan Al-Absi, a nutritionist at the General Revolution Hospital, said: “The condition of this child has been exacerbated by the inability of parents to rescue this case on time due to the siege on Hodeidah.”

As the new school year starts amid continuing violence in Yemen, 2 million children are out of school, including almost half a million who dropped out since the start of the US-Saudi coalition in March 2015.

The education of another 3.7 million children now hangs in the balance as teachers’ salaries have not been paid in over two years.

On March 26, 2015, Saudi Arabia announced from Washington its aggression against Yemen, targeting all aspects of life, infrastructure, commercial and industrial establishments, and imposed an economic blockade on the country by closing airports.

At least 335 children have been killed and another 590 injured by US-Saudi violent attacks including airstrikes, mines and shelling an airstrike hit a bus in Sa’ada killing 41 school children, equivalent to another eight buses being hit, according to Oxfam International, citing data from the UN Civilian Impact Monitoring Project.

Many more have died from hunger and disease in a massive humanitarian crisis stoked by the aggression.

“The world was rightly appalled by an attack that took the lives of so many young, innocent schoolchildren. Yet almost one child a day has been killed in the year since and violence remains a daily threat for Yemenis, alongside the struggle against hunger and disease,” Muhsin Siddiquey, Oxfam’s Yemen Country Director said.

At least 20 million children worldwide missed out on lifesaving vaccinations last year due to a combination of conflict, lack of access and complacency, the United Nations has warned.

According to data from Unicef and the World Health Organization, vulnerable children living in remote rural areas, urban slums and unstable regions are disproportionately affected by gaps in coverage.

Globally, since 2010, vaccination coverage with three doses of diphtheria, tetanus and pertussis (DTP3) and one dose of the measles vaccine has stalled at around 86 percent,  the World Health Organization said. “While high, this is not sufficient. 95 percent coverage is needed – globally, across countries, and communities – to protect against outbreaks of vaccine-preventable diseases.”

The brutal aggression against Yemen has worsened the humanitarian situation for civilians in the country, with at least 193 children having died this year from cholera-related illnesses, according to Save the Children.

In a statement on Monday, the U.K. charity revealed that the country has seen more suspected cholera cases in the first half of this year than in the whole of 2018. A total of 439,812 suspected cholera cases have so far been identified, with some 203,000 children among those affected, Save the Children said. As Yemenis have suffered from acute malnutrition, the report noted that malnourished children are at least three times more likely to die due to their weakened immune systems.

African immigrant take the lives of Yemenis in Lahj