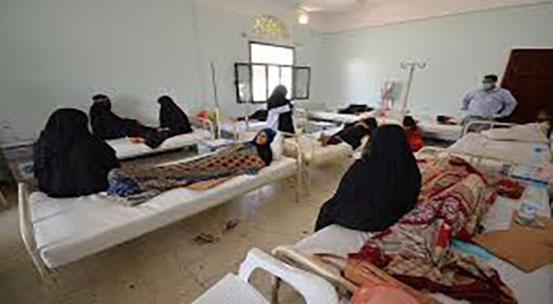 54 Deaths under Fifteen Died of Cholera and Diphtheria in Ibb

Since the beginning of this year, the number of child deaths due to Cholera and Diphtheria epidemics in Ibb Governorate has reached 54 cases.

Medical sources in the governorate stated that the number of deaths in the epidemic of diphtheria and cholera among children under the age of fifteen reached 54, while more than 37 thousand suspected cases of epidemics were recorded, since January 2019 until the end of November.

The sources noted that 16 children died as a result of the diphtheria epidemic, while the suspected cases reached 90 cases.

The sources also reported that the health authorities recorded 38 deaths of children under the age of 15 with the cholera epidemic, while 37,216 suspected cases were recorded in various districts of Ibb Governorate.

Ibb governorate witnessed a large spread of cholera and diphtheria, which led to it becoming one of the top governorates of Yemen referring to the number of deaths and injuries.